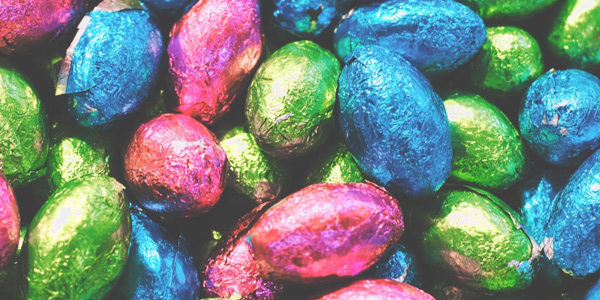 There’s no denying it. When we were younger, there was nothing more exciting than running wild around the garden, hunting for a flash of shiny, coloured foil poking out from behind a plant pot.

Now that we’re older and able to cave to spontaneous chocolate cravings year-round, we tend to find that we’re much more excited by a different kind of Easter egg. The movie Easter egg.

Whether it’s a highly-anticipated Marvel post-credit sequence, or simply a cheeky cameo from a famous face, we go wild for hidden movie messages, clues or secrets sent directly to us from the hardworking minds of the writers, directors and set designers themselves.

The best part? Even Easter eggs themselves are all about interpretation and they can be used as social commentary, as foreshadowing, to acknowledge the butterfly effect, to reference inside jokes amongst production staff, to nod to the director’s prior work – sometimes they’re just peppered in for fun.

And that’s what makes them great. Years later, you’re still uncovering them in films you’ve seen more times than you can count.

That’s why, in celebration of Easter, Uni-versal Extras has gone deep into the movie archives to relive some of our all-time favourite movie Easter eggs…

Any Pixar fans might spot that the Toy Story’s original bully, Sid Phillips, wears an iconic skull T-shirt throughout the first film. 2 movies later, that same t-shirt makes an appearance on Elm’s Street’s garbage man implying that, perhaps, Sid didn’t make it too far out of his home town.

Marty McFly’s local mall is originally known as ‘Twin Pines Mall’, however, when he returns back to 1985 after visiting his parents in 1955, we see that things have changed a little.

In this timeline, the mall is (and has always been) known as ‘Lone Pine Mall’. This is because Marty ran over one of the trees with the DeLorean time machine, so that when the mall eventually came to be constructed, it took its name from the one lone tree that stood in the lot.

A brilliant example of the butterfly effect in full force.

Eagle-eyed watchers may notice that David Fincher crowbarred a Starbucks cup into just about every scene in his 1985 smash hit Fight Club.

Fincher claims to have collaborated on this idea with Starbuck’s to poke fun at how, in modern American culture, there appears to be a Starbucks just about everywhere you look and used it as a device to make a comment on consumerism. Talk about product placement.

One ongoing Easter egg that has made it into almost every Pixar movie since 1987 is the seemingly strange combination code of ‘A113’. Those in the know might actually recognise that A113 is the classroom number where Pixar animators John Lasseter, Tim Burton, Michael Peraza, and Brad Bird all studied character animation at the California Institute of Art.

Since then, A113 has been purposely injected into projects including: Toy Story, A Bug’s Life, WALL-E, Up, Ratatouille, Finding Nemo, Cars – and just about every other Pixar flick you can think of.

In fact, the only one that avid Pixar fans haven’t been able to spot the 4-digit Easter egg in is 2001’s Monsters, Inc.

Get Out makes the cut for Jordan Peele’s imaginative use of Easter egg metaphor. Viewers may have been puzzled to witness villain Rose Armitage eating her cereal one component at a time: Fruit loops in one bowl, milk in a glass beside it.

Without dropping any spoilers, this was prime Peele demonstrating a family with very strong views on segregation. A phenomenally subtle yet effective Easter egg for those quick enough to catch it!

Mind-bending movie, Inception, was known for getting viewers scratching their heads. However, those familiar with Greek mythology might take note of the character Ariadne played by Elliot Page.

In Greek mythology, ‘Ariadne’ was a Cretan princess known for saving her lover Theseus by giving him thread which he used to find his way out of the labyrinth and away from the grips of the Minotaur.

In Inception, Ariadne plays a similar role and uses her skill as an architect to negotiate shortcuts in the maze. Ultimately, she proves to be the character credited with Cobb’s escape.

Movie buffs may also notice that the 1981 cult classic Indiana Jones: Raiders of the Lost Ark is stuffed to the gills with references to Lucas’ Star Wars.

Fans of Star Wars will immediately spot the nod to 2 of the most beloved characters, Obi-Wan Kenobi and C-3PO, when taking a look at Indy’s pal, Jock Lindsey’s airplane registration.

Later on, whilst on a hunt through Peru and Egypt for the Lost Ark, Indy can also be seen in shot next to a temple pillar with some strangely familiar markings. Hands up, who can see the iconic duo C-3PO and R2D2 amongst those hieroglyphics?