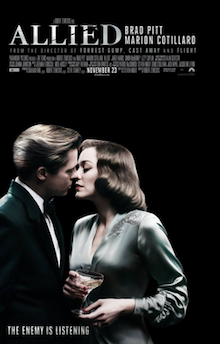 Set in the middle of World War II, Allied follows the story of Canadian paratrooper Max Vatan as he meets French Resistance fighter Marianne Beauséjou and they begin an unlikely romance against the backdrop of war.

The production was filmed in various locations across South East England including Brentford, Park Royal, RAF Halton and West Wycombe. In addition to normal supporting artist and walk-on parts, Uni-versal Extras also cast body doubles for some of the main cast members.

When watching Allied, keep your eyes peeled for…

I played one of the embassy's workers. Working closely with Brad Pit was amazing and unforgettable. Thank you for the opportunity.

I worked for one day on this in Brentford. I played an RAF Chaplain in the RAF hospital scene featuring Mr Pitt. It was an enjoyable day and I liked the film.

Were you a Uni-versal Extra on Allied?