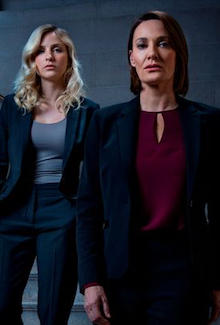 Bancroft is a dark and compelling thriller about a Police Detective called Elizabeth Bancroft who has an extraordinary secret!

Supporting artistes were supplied for filming in Bury, Manchester and Shrewsbury. In addition to the wide range of extras that were supplied, Uni-versal Extras also cast individual roles for the extended family of the main characters including Charlie’s daughters, Brian’s father and Davey’s friend. A double was also provided for Elizabeth Bancroft herself!

When watching Bancroft, keep your eyes peeled for…

Spent half a day filming as the decorator going into Bancroft's house. Great set and facilities. I got to meet Adrian Edmondson. Great fun.

Were you a Uni-versal Extra on Bancroft?