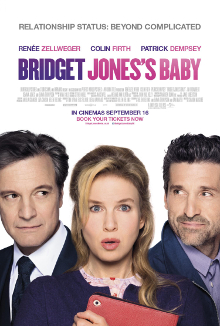 Bridget Jones’s Baby follows Bridget on a new adventure as she accidentally becomes pregnant. The main problem is that she cannot be sure who the father is following nights of passion with the well known Mr. Darcy and a new man.

The company cast extras and background artists for filming in several locations including London, Hayes Film Studios, Windsor and on Albert Bridge.

When watching Bridget Jones’s Diary, keep your eyes peeled for…

Thank you for my very first doubling experience as the hand double that carried Bridget's massive cake! It was very surreal wearing a pregnancy bump and heat shield surrounded by men with extinguishers and cameras. My kids now think I'm cool!

I was the bearded Venture Ranger on Ben Nevis mountain with a team of camper scouts who "moon" Bridget as she tries to do a live news feed. Her computer gets stuck on a close-up of my bum with a spinning pinwheel - hysterical! I had so much fun on this production. Thanks UE and everyone involved.

Thank you for casting me as a partner in the NCT class. It was such an enjoyable two days! It was surreal seeing myself prominently on the big screen when the film was released recently. All the pregnant mums (who have had their babies now) have continued to keep in touch which is beautiful - there are some Bridget Jones Babies for sure!

I just wanted to say a massive thank you for choosing me to be an extra in the Bridget Jones movie NCT class role. We had so much fun filming and loved every second of it - your team were all awesome and it was the best two days!

Were you a Uni-versal Extra on Bridget Jones’s Baby?