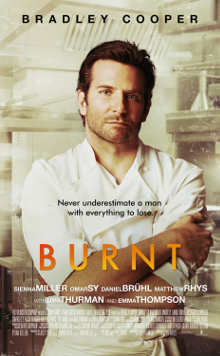 Adam Jones is a chef whose party lifestyle leaves his promising career in tatters. After cleaning up his act, Adam returns to London in search of redemption.

Uni-versal Extras was an extras agency on the Burnt feature film starring Bradley Cooper. Those who worked on the production may know it better under its working title of Adam Jones.

The agency supplied a wide range of supporting artistes for multiple UK filming locations including Ealing Studios, West London Film Studios and Berkshire. In addition to large crowd scenes such as those set in the restaurant, Uni-versal Extras also cast doubles for some of the main cast.

When watching Burnt, keep your eyes peeled for…

This was my first ever job for Uni-versalEXTRAS and it was such an incredible experience. It was set in Burger King in Leicester Square where we had to sit in the background pretending to be customers. The best part was meeting Bradley Cooper and Sienna Miller.

Were you a Uni-versal Extra on Burnt?