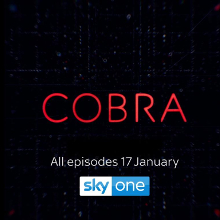 Britain is in crisis, there’s no power, no food, riots are breaking out in the streets and hundreds of people will die if someone doesn’t act soon! In this new original drama from Sky One, we see the Prime Minister having to make some tough decisions as operation COBRA comes into effect.

Were you a Uni-versal Extra on COBRA?