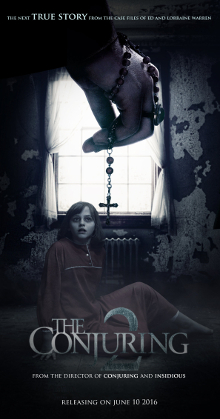 Based on the real life case files of Ed and Lorraine Warren, The Conjuring 2 follows the duo as they attempt to help a single mother in North London whose house is full of evil spirits that are determined to possess her children.

Uni-versal Extras was the sole extras agency for The Conjuring 2, a sequel to the popular original feature film.

When watching The Conjuring 2, hide behind your cushion and look out for…

The Conjuring 2 was my first job as an extra. I loved it, despite the cold! The runners looked after us well, the costume, hair and make-up team were great and I was really impressed with how friendly the director was to us.

I played a neighbour in Enfield and was then picked for a more featured role as the 'nosey neighbour'. I was there for three days and worked alongside the most lovely people. Thank you so much Universal Extras for this amazing experience.

Were you a Uni-versal Extra on The Conjuring 2?