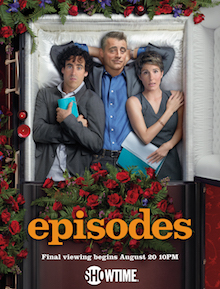 Episodes is a TV show about two British writer-producers who have a hit TV series. When offered a lucrative contract to take their show to Hollywood, the duo chooses to enlist the help of Friends actor Matt LeBlanc.

The show was filmed across South East England with extras supplied at Elstree Studios in Hertfordshire, West London Studios, Central London and in Guildford, Surrey. Many of the extras cast were in roles playing film staff, i.e. camera operators, set assistants, PAs and writers. Uni-versal Extras also cast doubles for the show.

When watching Episodes Season 5, keep your eyes peeled for…

Were you a Uni-versal Extra on Episodes?