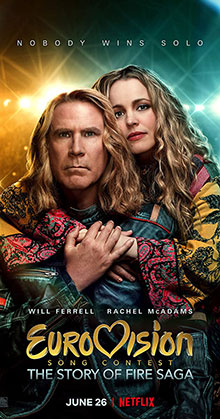 Eurovision: The Story of Fire Saga

When two aspiring musicians are given a chance to represent their country at the Eurovision Song Contest, they can finally prove that any dream worth having is a dream worth fighting for.

Uni-versal Extras was a casting agency for the Eurovision Song Contest: The Story of Fire Saga Netflix feature film. Extras and supporting artists were supplied at Warner Bros. Studios and Knebworth House in Hertfordshire, in addition to London.

I had the time of my life filming Eurovision at Warner Bros. Studios! I was blown away to work there and be involved in the process. I had the best night of lockdown watching Eurovision and seeing the people I had worked with. My neighbours are probably sick of the soundtrack as I play it regularly to remind me of such a fabulous time.

Eurovision: The Story of Fire Saga

Were you a Uni-versal Extra on Eurovision: The Story of Fire Saga?