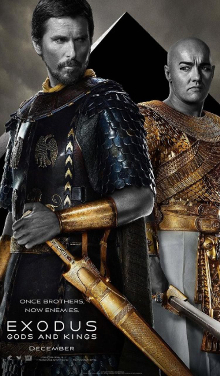 Exodus: Gods and Kings is the story of Moses (Christian Bale) as he rises up against the Egyptian pharoah Ramses. After freeing a group of slaves they embark on an epic journey, chased by the biblical plagues.

Uni-versal Extras was an extras agency on the Exodus: Gods and Kings feature film, supplying a range of Extras and Supporting Artistes for filming at Pinewood Film Studios.

When watching Exodus: Gods and Kings, keep your eyes peeled for…

I was one of Ben Kinsley's kinsmen as he told Christian Bale's Moses that he was not Egyptian royalty. It was great to be close to great actors delivering and to watch Ridley Scott direct.

Were you a Uni-versal Extra on Exodus: Gods and Kings?