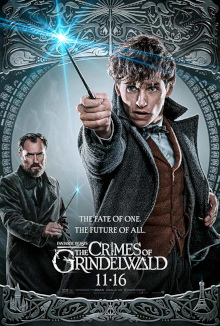 We follow Newt’s continuing adventures in the Wizarding World as he is enlisted by Hogwart’s professor Albus Dumbledore to help thwart Grindelwald’s dastardly plan of rising pure-blood wizards to ruling over all non-magical beings.

This is the second instalment of the Fantastic Beasts series, which may have been known as “Voltaire” to the supporting Artists working on it. Although the film is set over worldwide locations including New York and Paris most of the filming took place in the Warner Bros Studios in Hertfordshire, London and Chippenham in Wiltshire! In addition to casting a range of background extras for the various crowd scenes, Uni-versal Extras also cast doubles and stand-ins for some of the main actors as well as some featured roles including Dumbledore’s family.

When watching The Crimes of Grindelwald, keep your eyes peeled for…

I worked on Fantastic Beasts: The Crimes of Grindelwald and loved it. It was my first ever supporting artist work in the UK. Thank you Uni-versal Extras for this opportunity!

I got to do my first ever extra role as a Dock Worker on the set of Fantastic Beasts at Warner Bros Studios. I found the whole crew to be exceptional, professional and fantastic. It felt like negative zero on set with arctic winds that tested everyone's resilience, but we all worked together as a team to make sure everyone stayed warm.

Thank you for booking me as a stand-in for Fantastic Beasts, it was a brilliant experience.

Were you a Uni-versal Extra on Fantastic Beasts: Crimes of Grindelwald?