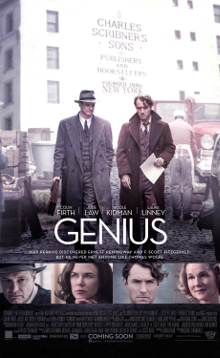 Genius is a biographical drama set in New York about Max Perkins and the American southern writer Thomas Wolfe.

Uni-versal Extras was the sole extras agency for the 2016 feature film, Genius.

As the sole extras agency, the company supplied a range of supporting artistes and extras with a distinctive look for this period film set in 1920s America. Despite this, Genius was actually filmed in multiple locations across England including London, Liverpool, Manchester, Portsmouth, Didcot and Chatham in Kent.

In addition to general extras and walk-on roles, Uni-versal Extras also supplied some of the smaller named character parts and stand-ins for the main actors and actresses.

When watching Genius, keep your eyes peeled for…

Thank you for casting me as the stand-in for Laura Linney in Genius. I had a fantastic time and also managed to gain experience as a runner on set.

Were you a Uni-versal Extra on Genius?