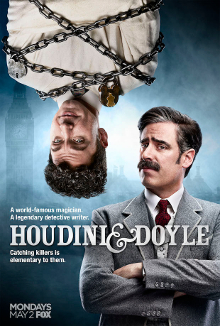 Houdini and Doyle are called in to work with New Scotland Yard in order to solve some of the countries more bizarre and inexplicable crimes.

This production was shot in several North West locations with extras cast for filming in Manchester, Liverpool and Stockport. Supporting artistes were also supplied in Derbyshire in the East Midlands.

When watching Houdini and Doyle, keep your eyes peeled for…

It was spooky (in a good way) working in the old hospital at night, with its poor lighting and Victorian tiled walls - especially when we filled up a narrow corridor with our white nighties and 'greasy' hair. I loved it! Stephen Mangan was friendly and funny and Rebecca Liddiard was a sweetie. The director made me feel important, even though I was only in it for a few seconds.

Were you a Uni-versal Extra on Houdini and Doyle?