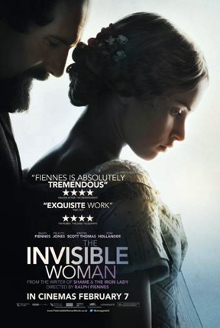 The Invisible Woman is a biographical drama following the story of Charles Dickens as he meets a younger woman who becomes his secret lover.

Uni-versal Extras was an extras agency for The Invisible Woman, directed by and starring Ralph Fiennes.

The production shot in multiple locations across the UK, with extras being supplied for filming in London, Leavesden Film Studios in Hertfordshire and Luton Hoo in Bedfordshire.

When watching The Invisible Woman, keep your eyes peeled for…

Were you a Uni-versal Extra on The Invisible Woman?