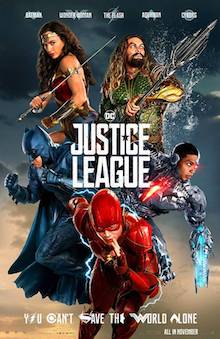 Inspired by a selfless act of kindness by Superman, Bruce Wayne assembles a team of heroes to fight an enemy, the likes of which the world has never seen before.

Justice League is a massive blockbuster and was filmed primarily at Warner Bros. Studios in Hertfordshire. Parts of the film were also shot in Bedfordshire, London, Shepperton Studios and Cardington Studios. In addition to extras and background artists, Uni-versal Extras also cast some specialist parts including a stand-in for Jason Momoa, a body doubles for Ezra Miller and Jeremy Irons, soldiers with SPACT experience and even a stand-in for an alien!

When watching Justice League, keep your eyes peeled for…

I played the part of a school teacher at the British Museum. It was a privilege to be part of Justice League! Thank you so much for the experience.

I just wanted to say thank you for putting me forward, I had an amazing time on set and now I'm in a Justice League movie! As you can see from my pictures, I am not much of a smiler but I have been smiling since I saw the movie.

I had a really good day, it was great fun! Thanks again for all your help and I hope to get more work soon.

I just wanted to say thanks! I made the cut and can be seen clearly chewing gum as a Metropolis Pedestrian near the beginning of the movie. It's made my Christmas!

I had the pleasure of taking part in 3 weeks of work on this movie, I cannot be thankful enough of Uni-versalEXTRAS for putting me forward. I had a really nice scene making it through the artificial rain and dodging cars in front of one of the main actors which didn't make the cut. But I did have the ultimate pleasure of seeing myself at the cinema in the very end scene.

I had a fantastic couple of days working on Justice League. It was very surreal and so much fun. Thanks for all your help, I look forward to working on many more upcoming productions.

As a janitor at Starlabs, I had to run away from a monster/burning building and get wet. It was great fun and I made new friends!

Justice League was a brilliant movie to be a part of, so thanks for the opportunity! Got the bonus of actually seeing myself on the big screen too!

Were you a Uni-versal Extra on Justice League?