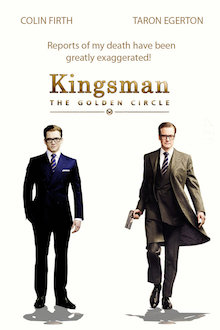 Casting Kingsman Across the UK!

Uni-versal Extras was the sole extras agency for Kingsman: The Golden Circle, casting a wide range of extras and supporting artistes across the UK.

In addition to background extras, Uni-versal Extras was also responsible for casting stand-ins and doubles for some of the main actors and actresses. Various other casting services were provided, for example with costume and makeup tests. The film was shot across the UK with extras and supporting artistes supplied to Longcross Studios, Pinewood Studios, Warner Bros. Studios, Ealing Studios, and in London, Surrey, Buckinghamshire, Birmingham and Northamptonshire.

When watching Kingsman: The Golden Circle, keep your eyes peeled for…

Kingsman: The Golden Circle was perhaps the best experience I've had as an extra. My role was as a patient with a blue rash - the makeup detail was amazing. Despite being outside in December when we were acting as though it was summer, it was so enjoyable. Having to act desperate to enter a hospital certainly warmed a lot of us up - jumping and shouting to the point we lost our voices! Definitely a day I won't forget. Thanks to all the team who made it such a great experience. It was amazing to be part of something so big.

I just wanted to say how impressed I was with this production. The Assistant Directors did an absolutely fantastic job of looking after us, and all the supporting artists I chatted to were lovely and very professional. Thank you so much - I look forward to many more opportunities in the future.

Were you a Uni-versal Extra on Kingsman: The Golden Circle?