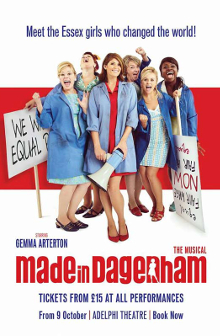 Made In Dagenham Stage Show

Made in Dagenham is a West End musical that first opened in London in 2014. Based on the popular film by the same name, the story follows a group of women who strike to fight inequality in the workplace.

In the run up to the stage show, the cast was unconfirmed. Made in Dagenham enlisted the help of UniversalEXTRAS to supply actresses for a photo-shoot to be featured in the promotional poster campaign prior to its official opening.

Were you a Uni-versal Extra on Made In Dagenham Stage Show?