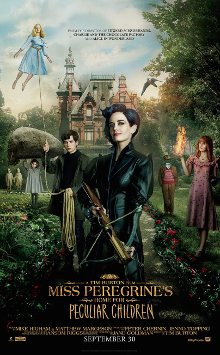 Miss Peregrine’s Home for Peculiar Children tells the story of Jacob, a seemingly ordinary boy who follows clues to discover a strange new world. Little does he know that it will be his responsibility to protect his newfound friends from their dangerous enemies.

In addition to special extras roles and doubles, Uni-versal Extras also helped to cast the Odwell twins as the Masked Ballerinas in the movie. Supporting artistes were supplied in Blackpool, Cornwall, Antwerp in Belgium, Longcross Film Studios and Pinewood Film Studios.

I played a man holding a walking stick in front of the tower. I really enjoyed the day.

I loved being a part of this production for filming in Blackpool. It was the first time that I have ever been an extra and hopefully it won't be the last - good pay, fantastic food, an enjoyable experience and I met some lovely fellow extras. Great in every respect!

Were you a Uni-versal Extra on Miss Peregrine’s Home…?