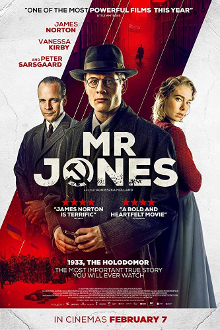 Gareth Jones was a Welsh journalist who travelled deep into the Soviet Union in the 1930s to uncover some shocking truths. This true story was the inspiration for George Orwell’s classic tale of corruption and communism, ‘Animal Farm’

Uni-versal Extras provided extras and supporting artists in and around Edinburgh and West Lothian for Mr Jones, Feature film.

Were you a Uni-versal Extra on Mr Jones?