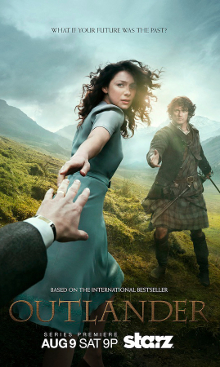 Outlander follows the story of Claire Randall, a WWII combat nurse who gets swept 200 years back in time leaving her husband in the future. Immediately thrown into perilous situations, Claire fights for survival and is forced to marry a young Scottish warrior becoming torn between the two men in two different times.

Uni-versal Extras was an extras agency for the Outlander TV series filming in Scotland and England. The company supplied extras and walk-ons for a variety of different roles for the two different time periods in which the show is set. This therefore required extras to wear diverse period costumes.

Based in the serenity of rural Scotland, Outlander filmed in locations including Cumbernauld, Newtonmore and Aberdour. Some scenes were also shot in Cumbria in England.

When watching Outlander, keep your eyes peeled for…

Thank you for getting me the job on Outlander as a policeman - it's been a while since I worked on set and I had forgotten how much I enjoy it. Keep up the good work.

I worked as an 18th century jailer, and it actually felt like I was in the time and space. Amazing experience!

This was my first extra job and I had a great experience! Everyone was very friendly and it was awesome to see how a TV show is filmed.

Thank you for giving me my first opportunity as an extra; Outlander was the programme I was watching on TV when I got the call, so I was really excited to take part myself!

Were you a Uni-versal Extra on Outlander?