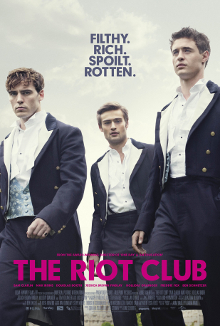 The Riot Club is a feature film adaptation of ‘Posh’; a play by British playwright Laura Wade. The story follows the antics of two first-year students at Oxford University who join the infamous Riot Club.

Uni-versal Extras was the sole Extras Agency for The Riot Club which was known as Posh during filming. The company supplied a wide range of extras and supporting artistes for this production in diverse roles, often playing parts within the confines of university life.

This productions filmed in a variety of locations across the UK including Windsor, Winchester, London, High Wycombe, Slough and Oxford.

When watching The Riot Club, keep your eyes peeled for…

I had a great day in Winchester playing a parent. The crew worked incredibly hard in the heat - looking forward to the next job!

I had a featured walk-on role as a Police Officer - it was a truly amazing experience. The Director Lone Scherfig asked for my opinion on the role I was playing which she took on-board. I shall never forget this experience and I'm so looking forward to watching this film - thank you Universal Extras for this truly amazing opportunity.

I spent 3 night shoots propping up the bar in the pub scene and in close proximity to the "posh" boys. I enjoyed this shoot very much; interesting scenes, nice location, good catering at base, great to meet fellow SAs old and new.

I had a great day on this production - really nice crew and director.

I enjoyed my time on set chatting with my "wife, son and other parents" in Oxford!

I played one of the founders of The Riot Club in the opening sequence. It was great to act alongside Harry Lloyd!

Were you a Uni-versal Extra on The Riot Club?