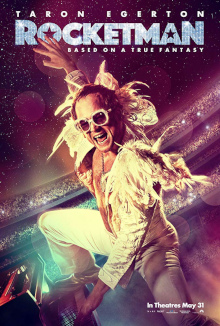 We follow Reginald Dwight through the highs and lows of his breakthrough years as a Music artist. Exploring sex, drugs and rock and roll and his passion for music and fashion with his journey to become the legendary Elton John.

Filming for Rocketman took place across London and Buckinghamshire. Whilst supplying extras and supporting artists for glamorous parties and crowd scenes, we also supplied doubles for some of the main actors such as Taron Egerton and his Piano Playing fingers as well as musicians for Elton John’s band!

When watching Rocketman, keep your eyes peeled for…

When I watched the film, it was impossible not to cry. Taron Egerton is amazing, What an Actor! It is so enjoyable to see a film and know we were part of it. Being a Supporting Artiste for Rocketman was a pleasure. I'll always admire and adore Sir Elton Jones, a great musician and I respect him for being able to overcome such a hard time in his life. You cannot miss this film, I love it. Thanks, Uni-versal Extras for putting me in this production.

I was so fortunate to have a featured part in this amazing production. Filmed at the most beautiful Brocket Hall in Hertfordshire, I had the most amazing couple of days. Personally shouted at (in a nice way) by Dexter Fletcher was both terrifying but just incredible...." Janet, Janet....I want to see your FACE " I played a lowly housekeeper dusting the staircase, but the two days spent on set at Brocket Hall was just wonderful - and Taron Egerton chatted to me like an old friend! Thanks so much Universal for making this happen!

Were you a Uni-versal Extra on Rocketman?