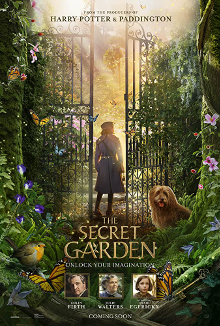 Based on the novel by Frances Hodgson Burnett, The Secret Garden is the story of an orphaned child who discovers a magical garden hidden in her uncle’s estate.

Uni-versal Extras was a casting agency for The Secret Garden feature film. Extras and supporting artists were supplied in London, at Pinewood Studios and also at Tilbury docks. In addition to standard extras roles, the agency also provided body doubles for actors and actresses including Julie Walters.

When watching The Secret Garden, keep your eyes peeled for…
Nurses, Soldiers, Ayahs, Officials and Dockers!

I was lucky enough to double for Julie Walters on this production. It was a truly magical experience with a wonderful cast and crew who made me feel so welcome.

Were you a Uni-versal Extra on The Secret Garden?