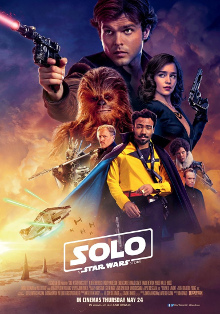 Uni-versal Extras was an extras agency on the Solo: A Star Wars Story feature film.

Continuing their prequel stories, Star Wars returns to the origin of one of its most unlikely heroes, Han Solo. Many of our extras may have known this production as it’s codename ‘Red Cup’ (the brand responsible for the iconic red party drinks cup is ‘Solo’). As well as providing extras and supporting artists, Uni-versal Extras also supplied specialist roles including doubles for the likes of Alden Ehrenreich, Paul Bettany and Donald Glover, clothing test models, dancers and even some 7-foot creatures!

When watching Red Cup, keep your eyes peeled for…

Thank you for this last week - it was my first experience working as an extra and I have really enjoyed representing Uni-versalEXTRAS. I hope to be back on set through your company again in the very near future.

I would like to say thank you for my first collaboration with you. I am looking forward to more exciting work.

Thank you for making a 51-year-old man feel 12 again. To be an Imperial Officer in Solo: a Stars Wars Story and get direction from Ron Howard was a dream come true!

I'm the first person you see in the trailer for Solo: A Star Wars Story, playing someone warming himself by a burnt out R2 unit. It was a dream job!

Thank you Universal Extras for giving me this unexpected and beautiful experience. Thank you for providing me with the chance to be on a Star Wars set and get directions from Ron Howard. Also, Working side by side with the first unit as Sagwa the wookiee. You guys gave me a chance to actually start a career in the film industry and it is a dream come true. It is unbelievable, I would never have expected this in a million years.

Thank you so much for putting me forward for Solo: A Star Wars Story. It was the most interesting, exciting and above all fun two weeks.

Were you a Uni-versal Extra on Solo: A Star Wars Story?