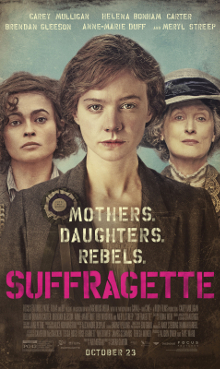 The incredible story of the early feminist movement and their struggle against the State in pursuit of equality, risking their jobs, their homes, their children and their lives.

Uni-versal Extras was the extras agency for the Suffragette feature film.

In addition to supplying extras and supporting artistes for the Suffragette production, Uni-versal Extras also cast doubles and stand-ins for some of the main actors and actresses including Meryl Streep. The production was filmed in multiple locations across South East England including Windsor, Hertfordshire, Surrey, Kent and Luton in Bedfordshire.

When watching Suffragette, keep your eyes peeled for…

Just to say a very good day yesterday in Shoreditch for the Suffragette shoot. Thanks again.

I enjoyed the days spent filming in the city of London and the crew were very helpful.

It was a fantastic experience and hugely beneficial for me in developing and progressing as an actress. I got to do some amazing scenes interacting with the main cast. I really appreciate the work that you're putting me forward for and would also like to thank Sarah Gavron, the Director, as she was so kind.

I thoroughly enjoyed every minute of my time on this production. The director Sarah Gavron and the entire crew and production team were fantastic to work with and this will be an extremely memorable experience for me.

I really enjoyed working on this film and will miss being on set. Thank you for putting me forward.

Were you a Uni-versal Extra on Suffragette?