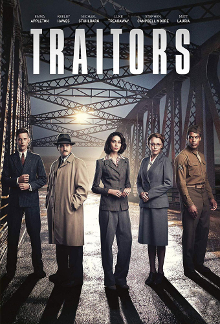 Traitors follows Feef Symonds, a young woman who wanted to make a difference in the war effort, even though the war may be over a political war still wages on. When she is approached by the Americans to spy on her own government, she embarks on a dangerous path. Is there anyone she can trust?

Our supporting artist may have known this production as ‘Jerusalem’. As well as providing extras we also supplied specialist roles including Musicians, Type Writer Users as well as Doubles and Stand-Ins for the main casting including Emma Appleton!

When watching Traitors, keep your eyes peeled for…

I played several roles, a British and French Docker filmed on Barry docks, and a person riding a push bike passing a shop in Cardiff. I have watched the series and enjoyed the end result. The whole experience was most interesting and I learned a lot from the other Supporting Artistes and set crew, we were like one big happy family on the two day shoot. I still keep in touch and have since worked on other projects with some of the people I met thank you U.E. for the opportunity. Cheers

I played a labour MP in Attlee's 1945 government. Fellow extras and crew were great to work with. We were treated with courtesy by the film company, and I felt we were all pulling together to create something excellent.

Were you a Uni-versal Extra on Traitors?