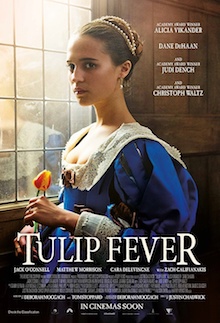 Tulip Fever is a love story about an artist who is commissioned to paint the portrait of a young married woman in 17th century Amsterdam.

Uni-versal Extras was the sole extras agency for the Tulip Fever feature film.

The production was shot in multiple locations across the UK including Pinewood Film Studios and Aylesbury in Buckinghamshire, Cobham in Surrey, Kentwell in Suffolk, Tilbury in Essex, Gillingham in Kent and Norwich in Norfolk.

When watching Tulip Fever, keep your eyes peeled for…

Tulip Fever was my first film in a featured role. I played the bearded lady in the tavern scene, with Zach Galifianakis, and I even got kissed by him. Although I am no stranger to wearing period costumes in films and on TV, it was certainly different having a beard stuck on me by the make-up department!

Tulip Fever was the first production I worked on with Uni-versalEXTRAS. I was based at Cobham Hall dressed as a beggar and had a fantastic time meeting lots of interesting people and being on an amazing set for many hours. I learnt so much and loved every minute... it certainly "wetted my appetite" to continue working as an extra!

Were you a Uni-versal Extra on Tulip Fever?