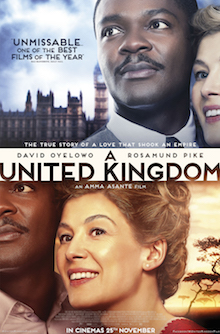 A United Kingdom is based on the true-life romance between Sir Seretse Khama, a Botswanan Prince, and a white woman from London called Ruth William Khama.

Uni-versal Extras was the sole extras agency for the UK filming of A United Kingdom.

Filming took place around South East England with shoots in London, Shoreham in West Sussex and Rickmansworth in Hertfordshire. The production was also filmed in Botswana.

When watching A United Kingdom, keep your eyes peeled for…

I was thrilled to be one of the dancers in this amazing film! It was wonderful to have the full period hair, makeup and clothes done. We were swing/jive dancers filming in the beautiful Rivoli Ballroom in London, and were expected to keep the dance energy high all day and it was tough in high heels but very enjoyable. We were privileged to see Rosamund Pike & David Oyelowo dancing too. I can't wait to see the finished film!

Were you a Uni-versal Extra on A United Kingdom?