Home » Extras » Productions » Into the Woods 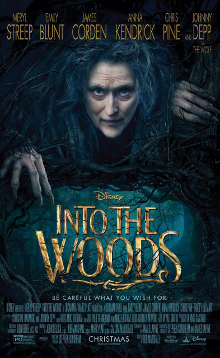 Into the Woods is based on the award winning musical that first premiered on Broadway in 1987. The story intertwines characters from classic fairy tales, as an ordinary baker and his wife search the woods for an array of magical (and well known) objects in order to reverse a curse that a witch has put on their family tree.

Uni-versal Extras was the sole extras agency for Disney’s feature film adaptation of Into the Woods.

Into the Woods was filmed in multiple UK locations including Surrey, Shepperton Film Studios, London and perhaps most memorably at Dover Castle in Kent where some of the climatic scenes of the film were shot. Uni-versal Extras supplied all the extras casting for each of these filming locations.

In addition to background extras and supporting artistes, the company also cast some specific roles such as doubles and stand-ins for the main actors including Johnny Depp, Meryl Streep, Emily Blunt and James Corden.

When watching Into the Woods, keep your eyes peeled for…

The whole thing was a great experience, thank you.

I agreed to work as part of Into the Woods which filmed yesterday, and I fully enjoyed it.

I had an amazing time during my two days at Dover castle for the earthquake scene! and even made an appearance in the official trailer!

The "earthquake" scene was so much fun to film, and the crew was so nice! Would love to do it all again :)

I spent two days at Dover Castle filming the wedding scene - the highlight was when Chris Pine put his arm around my shoulders and asked me if I was having fun!

Were you a Uni-versal Extra on Into the Woods?