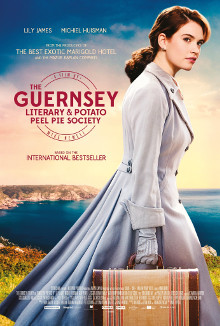 When a correspondence begins between young writer, Juliet Ashton and the members of the Guernsey Literary and Potato Peel Society, she visits the island to write a book about their wartime experiences.

Based on the novel of the same name by Mary Ann Shafter and Annie Barrows, Guernsey was mainly filmed in London and Devon. Parts of the film were also shot in Bristol, Oxfordshire, Buckinghamshire and London’s famous Ealing Studios. As well as supplying extras and background artists, Uni-versal Extras also supplied specialist roles including handwriting doubles for Lily James and Michiel Huisman, German-speaking soldiers and two whole brass bands!

When watching The Guernsey Literary and Potato Peel Pie Society, keep your eyes peeled for…

Had great fun playing a Nazi, bored to sleep by the discussions of the Literary Society of the title. Privileged to be in the scene with the leads, who introduced themselves as did the Director and DP, and couldn't have been nicer and more welcoming, as were the rest of the people I met on the production.

This was my first job as an SA, and yes it was a very early call time, and it was freezing but it was brilliant. Fascinating to be involved, see behind the scenes, meet some lovely people as well as becoming a bit more aware of all that goes on to make a production happen. Not forgetting the incredible transformation of becoming a lady in the 1940's!

Worked on this production when it had 2 days filming in Bristol, April ‘17 and it was good to film so local to me and use the Bristol M Shed and Balmoral boat. A strange sense of deja vu as I had filmed 'Another Mothers Son' at the same location, using the same boat (and similar wartime clothing) the year previous. This year, the first day saw me driving a beast of a motor: a 1939 Packard motor car. no power steering, gears on the stick and no mirrors, which made reversing interesting, driving Lily James and co-star along with the docks and helping them with their luggage.

I just wanted to say a big thank you for getting me into the Guernsey project. The whole production was so enjoyable to work on, and the additional parts/costume changes were fun to do. I was featured in the office scene, which was great!

It was tremendous fun, especially as being an extra is something that had been on my 'bucket list' for some time. The production team looked after a large crowd of inexperienced extras with great patience and encouragement during the filming.

Thank you for giving me the opportunity to be a part of this film. When I told my father that I am going to be in a World War II film, it put a lovely big smile on his face.

One of the highlights of my year was being in the Guernsey film. My first job with Uni-versal, I was the Police sergeant, and experienced scenes with most of the principals which was pretty special. Penelope Wilton and Jessica Brown Findlay were amazing up close! The weather, the scenery, the costumes, and the crew were all a joy. This was my favourite SA work ever!

Were you a Uni-versal Extra on Guernsey Literary & Potato Peel Pie Society?