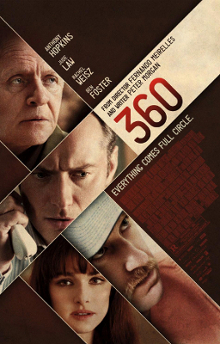 360 is a moving dramatic thriller following the interweaveing stories of people from disparate social backgrounds.

How was Uni-versal Extras involved?

Uni-versal Extras was the sole extras agency on 360, supplying extras for crowd scenes and specialist looks for individual featured parts. Some examples of the specialist looks supplied for the production include pathologists, corriners, a cab driver, and also the role of Alyssia which included flying the supporting artiste to Paris for filming.

for airport scenes with pilots, security staff and police.

Had a fab day, very starstruck by Ben Foster who didn't come out of character. Great experience can't wait to do it again.

I had fun and shared jokes with Anthony Hopkins when filming in Ascot, masquerading as Denver Airport!