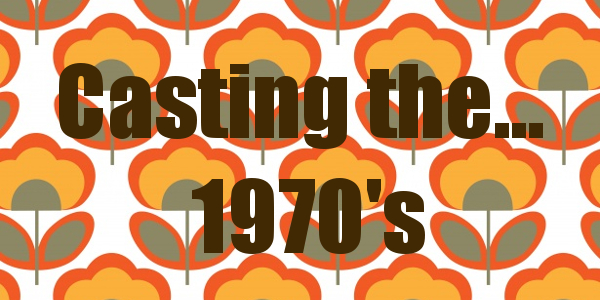 Here at Uni-versal Extras we are fascinated with ‘Looks’, Our Casting Team love the challenge of recreating bygone eras from our database of fabulous supporting artists. But what do they look for? With the success of rock biopics, Bohemian Rhapsody and Rocketman proving huge cinematic smashes and more productions looking for that ’70’s feel, we thought we’d find out just what makes the 1970’s so special.

The 1970’s often gets a bad rap, thought of by many as a decade of crazy fashions, silly hair cuts and enough clashing colours and patterns to assault your eyes wherever you turned.

Personally, I love it! The world was changing and even against the backdrop of wars, worker’s strikes and rolling blackouts, the ’70’s was still alive with style and a unbeatable spirit. Cinema saw the birth of blood curdling horror with classics like the Exorcist and the Wicker Man (both 1973), a new wave in comedy with the likes of Monty Python, National Lampoon and the might of Gene Wilder and Richard Pryor tickling our funny bones in the cinemas. Drama bought us films like The Godfather (1972) and Kramer vs Kramer (1979) and of course, 1977 saw the dawning of the Star Wars saga. Music gave us iconic performers bringing us Rock, Punk, R’n’B and most known for this era, Disco.

Why do the Casting Team struggle with seventies hair? Well, when thinking about hair, it’s the thicker the better. Although many modern haircuts draw inspiration from some of the 1970’s they have been given an update with a sleeker appearance, use of colours and even shaved details. Women throughout this decade opted for long flowing ‘Flower power’ locks, feather cut layers or a shorter but voluminous cut. All women’s hair cut of this decade aim to frame the face and highlight feminine features.

Although hair dying was popular during this decade, Productions tend to prefer natural hair when recreating as the colours on offer today far out weigh those available from the 1970’s themselves.

In this small snapshot of the 1970’s fashions you can see (from top left) Jane Fonda sporting ‘The Shag’, Farah Fawcett with her classic feather cut, Joanna Lumley with ‘The Pageboy’, Dorothy Hamill with ‘The Wedge’, Marsha Hunt with natural afro and Donna Summer with a ‘Stacked Perm’ 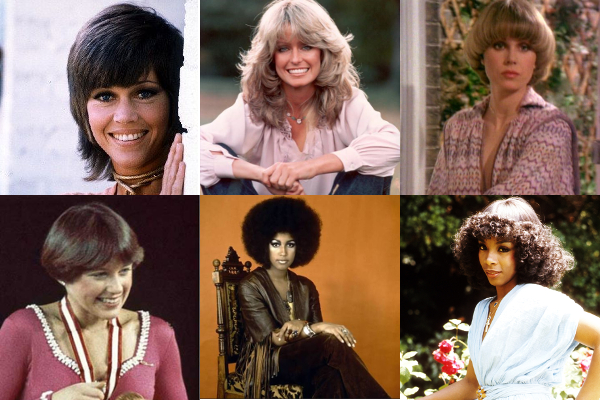 Short back and sides still proved popular with men, but the style of the times allowed more growth with hair reaching (or exceeding, depending) collar length. Trends in facial hair varied from full beards to completely clean shaven, the addition of side burns on the cheeks was also a popular fashion statement.

From top left – Michael Caine classic short back and sides, Barry Gibb long hair and beard, David Bowie (as Ziggy Stardust) one version of a mullet, John Travolta feather cut, Clint Eastwood long short back and sides with side burns and James Brown with natural afro. 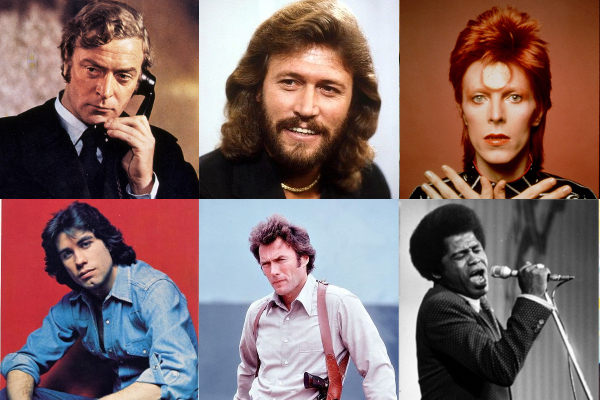 Natural grown out Afros continued to be celebrated for both black men and women as both a fashion and political statement of the continuing black pride movement. Today, with so many people opting for chemical straightening treatments, weaves or extensions, our Casting Team will often struggle to find the perfect natural locks!

So you are probably thinking “I should get myself some bell bottomed trousers and a shirt with a collar you could hand-glide with”, it would be fair to say this was a classic look throughout the 1970’s for both genders. However, the 1970’s had so many different fashion trends that it even led to Vogue Magazine being quoted “There are no rules in the fashion game now”

The hippy look was still strong in the fashion game, being carried over from the late 1960’s. The use of layering different textures and use of natural materials like wool and suede for clothing and wood, polished stones and feathers as accessories still proving popular. Classic hippy looks may contain maxi dresses, bell bottomed trousers, blouses, waist coats and scarves.

For those who were not seduced by the hippy vibe, patterned shirts or polo necked tops for the boys and halter neck tops or tight t-shirts proved popular with the ladies. Ladies fashions tended towards pastel colours such as light blues, yellows and lilacs, where as men’s fashions were inspired by pattern and texture with three piece suits in Paisley, velvet and corduroy becoming a go to fashion statement.

To sum up these fashion choices, I’m going to share a clip of one of my favourite films, The Stepford Wives (1975). In this terrifying feminist nightmare, aspiring photographer Joanna, finds herself moving her family away from New York to a sleepy suburban town, Stepford. Stepford seems too perfect, until the cracks start to appear. In this scene, Joanna’s neighbour starts acting very strange at the local picnic. When watching the Supporting Artists, remember to take a moment for those fabulous floral maxi dresses, fantasy sleeves, the stylish suits and the use of the beautiful pastel yellows.

As the hippy movement faded away, the everyday seventies wardrobe became more conservative with colours becoming more natural with shades of browns, creams, blues and greys becoming the in thing. Both genders took to suits, flared trousers and fitting shirts with collars widening as Disco become more popular.

For the more daring, skin became the in thing with both genders braving more revealing clothing, although the clothes were cut in a baggier style. Bare chests were a common sight with men loosing buttons or just wearing their shirt open and fastening at the waist and women took to revealing their legs and stomachs.

To summarise these bold fashion statements, I have chosen to share the iconic opening scene from Saturday Night Fever (1977), honestly, how can someone look that cool just carrying a tin of paint? The film follows Tony (John Travolta) a young Italian American as he deals with his harsh life of an unhappy home life, racial tensions in his local community and the daily grind of his dead-end job. His escape? Well, Disco dancing, of course. When watching, check out those sharp collars, coordinated coloured shoes and suits of all shapes and sizes.

The Seventies also saw the emergence of subcultures including punk and early new romantics (which really came into their own in the 80’s). Punks took an anti-stance on fashion, choosing to wear dark colours, ripped denim and leather, accessorising with studs, pins, piercings and of course, statement gravity defying hair.

The new romantic movement was almost the complete opposite, evolving from the stage outfits of performers such as David Bowie, Freddie Mercury and Elton John into the mainstream fashions with both sexes dressing in androgynous styles. Bold colours and shiny fabrics, were paired with old fashioned ruffled shirts, large belts, scarves and daring make up choices.

So there you have it, however you feel about the real 1970’s they have really stamped their mark on the pages of history. We’ll finish this blog with a scene from the last 1970’s film our talented Casting Team worked on, Rocketman starring Taron Edgerton as the one and only Elton John. In this scene, Elton is performing for some of our amazing Supporting Artists at the famous Troubadour club in West Hollywood (well, close enough). Check out the big hair, iconic halter neck tops, patterned shirts and trousers so wide a family could go camping in them.

We hope you have enjoyed this blog on Casting the 1970’s. We’ll be back to tackle other decades we regularly cast with some flashbacks to help you understand how our Casting Team cast these iconic looks.