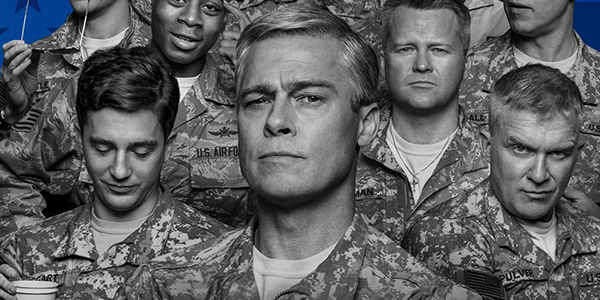 A fascinating firsthand account of working as an extra for Netflix’s War Machine feature film starring Brad Pitt and Tilda Swinton. Catherine Taylor, a supporting artist with Uni-versal Extras, recounts her time in London covering everything from Danish pastries to working alongside Hollywood actors!

The Quiet Buzz of Excitement

It is a crisp, sunny October morning in a leafy square in the heart of London. A large marquee is filled with around 300 people helping themselves to coffee and Danish pastries. There is a quiet buzz of conversation. Some of the crowd are chatting, some reading books or knitting. The majority are soberly dressed in suits while the rest are, slightly disconcertingly, kitted in military fatigues.

Suddenly, a runner appears at the entrance and calls out clearly – “Can we have all our German speakers now please?” The essential nature of the background artiste’s job is to hang about for ages and then “MOVE, MOVE, MOVE!”

We had all assembled by 6am that day at the production base in South London, been plied with hot drinks and breakfast, had our outfits checked, hair groomed and make-up carefully applied by the wonderful team. While waiting in the queue for the transport to set, we got glimpses of scenery being specially crafted to create an ambassador’s office or a US army shower block.

Fed and prepared, we are ready to roll…

Now, several hours later, we are crossing the road, navigating the workday traffic and tourists, and emerging from Russell Square into a German lecture theatre. The exterior of the University of London Senate House does indeed have the imposing scale and demeanour of a mid-20th century Eastern Bloc state building. Quickly filing into the vacant seats of the grand lecture hall, we get a chance to take in the dozens of crew, cameras, recording equipment, miles of cable and lighting.

A very familiar figure is in a commanding position on the raised platform at the front. Pretty convincing, but he is a stand-in for the person we suspect will be here shortly. An assistant director briefly outlines the scene for us and how we are expected to react. I must admit to slight butterflies, goose bumps and a few other adrenalin induced emotions.

The world’s leading actresses and actors…

A slim, elegant woman passes next to my chair on her way to the centre of the ‘audience’. What a treat – one of my absolute favourite actresses, Tilda Swinton! I know we are there to be cool professionals but my stomach does jump slightly at the unexpected proximity to one of the most versatile and original people around.

Next, the actual Brad Pitt enters the stage, takes his direction, cameras roll and we are off! Brad expertly assumes his role as an American general giving a seminar about combat to us (the ‘German officials’) and imbues the part with a vigorous intelligence and charm.

Swinton stands to quiz the general about his motives and philosophy in a perfect middle-European accent. There are a few verbal reactions from the crowd and the scene is done; or rather the first take. Over the next seven or so hours this short scene is shot from every angle possible and with varying reaction shots.

There are no huge egos in the room…

At a very rare missed line or during a pause for some technical check, the stars break the tension with a quick, funny remark. Up close, the talent and star quality of the actors shine as they consistently give a top-level performance each time the speeches are repeated. All the actors are also unfailingly polite and generous with their co-workers on set.

What I really love is observing all the crew and how they collaborate to create and support the storytelling. Most of the huge group of people on and off the set have been up since the early hours and will still be working after we have been signed off for the day. The energy and attention to detail never seems to flag. I can only put this down to a deep love of the industry, lots of coffee and great location catering.

When the cameras are not rolling and we have to remain in position for the next set-up, we wriggle our limbs to avoid stiffness and chat very quietly so as not to distract the crew. There is always one of the main actors to observe or a fascinating glimpse of a film camera next to my seat to hold my interest.

We extras are well cared for with regular breaks and a brief hot lunch with a chance to hear about other film and TV jobs or what some people do in their real life if they are not professional supporting actors. As the temperature rises in the hall, we are even given bottles of water (which we have to hide under our chairs with the labels removed).

Time to return to ‘real life’…

Once the final take is over and we are released, I feel quite sad to leave. What a terrific day we have spent, watching some of the best actors and filmmakers in the business as they weave their magic with skill and artistry; a real privilege.

About the Author: Catherine Taylor is a registered member of Uni-versal Extras.